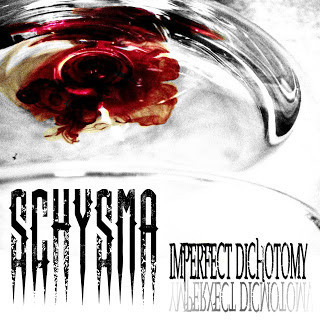 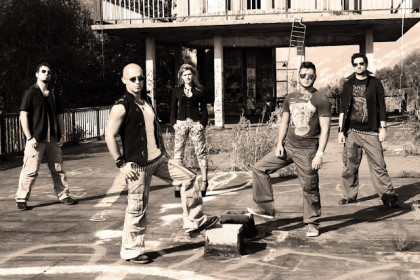 SCHYSMA is the creation of keyboardist Martina Bellini and bassist Giorgio Di Paola, both originally members of a band called PURPLEKNIGHTS. In September of 2009, after years of live performance in rock and metal clubs across Northern Italy, the two began working together to compose original songs.
Initially, the new material was intended for the band, but it soon became apparent that the music they were creating was a radical shift from their band's current style, incorporating more complex rhythms and an increasingly more progressive sound. Unfortunately, their collaboration began to create friction within the band and within a year PURPLEKNIGHTS had dissolved completely.
Both Martina and Giorgio, however, were inspired by their new musical results and were motivated to continue. Together, the two set out to form a new band and began their search for musicians who would share their enthusiasm. By mid-2011, after countless auditions, two exceptional musicians were discovered, both of whom would add significant value to their project.
Drummer Lucas Solina, not only provides powerful, precision grooves that strengthen each song, but also brings his skills as a composer to the group. Vladimiro Sala is an accomplished guitarist who demonstrates a remarkable command of his instrument with innovative technique. Last, but not least, vocalist Riccardo Minicucci joined the group in 2012 and brings his aggressive and melodic vocal styles to complete the band's formidable lineup.﻿ 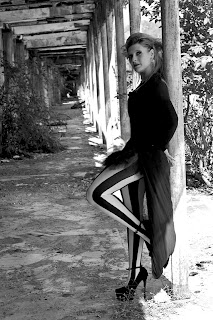 Martina was born in 1984. Her younger brother, Michele, is the drummer of the band Baby-Lon.
She started playing classic piano in 1995, when she was 11, under the guide of Maestro Filippo Ravizza. When she was 16, in 2000, she took the bachelor diploma in classic piano at "G.Verdi" music school in Milan, Italy. In the meanwhile, she started playing guitar as a hobby, becoming pretty good.
So she played guitar in several heavy metal and death metal bands. During her days going from a band to another, she met the bassist Giorgio Di Paola. They started a project as a duo (Martina on guitar, Giorgio on bass), but then they decided to call other musicians, create a full band and Martina abandoned guitar to turn back to the keyboards. It's the origins of Purpleknights, born as a Deep Purple tribute band (as the name suggests), then turned into a hard'n'heavy cover band, and finally into a Whitesnake tribute band. It was 2003.
From that moment on, Martina and the Purpleknights played live in more than 200 gigs during a no-stop tour for 3 years on all the biggest metal-music stages of Northern Italy.
Then the band took a break and in 2010 Martina and the others started writing their own songs. This was the moment in which Martina started to be interested in electronic music and digital programming. This changed her studio and live arrangement, and moved her ideas far away from the ones of the rest of the band members: that's the reason why she and Giorgio founded Schysma, in which she has the chance to explore new musical experiments.
In 2011 she followed some lessons as sound engineer, then she joined also Sehnsucht (http://www.sehnsucht.it/), a Rammstein's tribute band (in which she still plays nowadays). 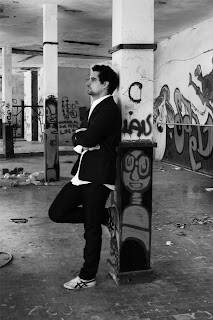 Giorgio was born in 1981. He lives a happy childhood, but far away from music. He grows up listening to every kind of tunes.
When he's 11, he starts listening to Queen's albums: this is the reason why he starts playing bass, inspired by "Another One Bites The Dust". From that moment on, music is the centre of his life. He starts music school in his town under the lessons of the great Maestro Sandro Dandria, who improves Giorgio's technique and personality. Through time, Giorgio finds hard 'n'heavy is his favourite genre to play.
When he's 16 he founds Sinevolume together with his friends Davide, Stefano, Marco and Dalia, playing live in some public places and performing mainstream rock covers. After two years of activity, the band write original songs and record them in the EP "Ouverture".
In the meanwhile, Giorgio wants to abandon mainstream rock to focus on hard'n'heavy and he meets Martina Bellini: they found the band Purpleknights, born as a Deep Purple tribute band (as the name suggests), then turned into a hard'n'heavy cover band, and finally into a Whitesnake tribute band. It was 2003.
From that moment on, Martina and the Purpleknights played live in more than 200 gigs during a no-stop tour for 3 years on all the biggest metal-music stages of Northern Italy.
Because of different musical ideas of the members, the band breaks up and Giorgio founds Schysma with Martina. With the arrival of Vladi, Luca and Ricky, the band is complete and "Imperfect Dichotomy" is produced.
Giorgio's influences are Rush (Geddy Lee is one of his favourite bassists), Iron Maiden, Def Leppard, The Who, Queen, Led Zeppelin and The Beatles. 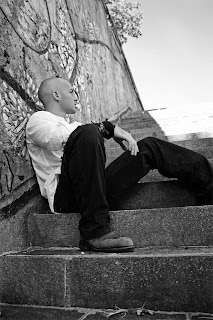 Riccardo (call him Ricky!) was born in 1981. He moved his first steps into the world of music when he is 17, when he and his friends share their passion for rock music.
At that time, this was just a hobby for Ricky, a way to live in a different way his youth: this leaded him to discover his feeling with singing. He loved every kind of music, from classical to the 70's music, to the contemporary one, of every kind of genre (with a predilection for Rock and Metal).
Just a few years later, this hobby became something more concrete, with the birth of the melodic metal band Ananke (in which he still sings). To improve his vocal qualities, Ricky started studying modern singing, opera singing and voicecraft. He met the famous singer Michele Luppi and started taking lessons from him. After that, on Luppi's suggestion, Ricky took lessons from a former Luppi's student, Alessio Garavello.
Through the following years, the hobby of music evolved into a concrete working reality, since Ananke published its first full album under label in 2009. This is the very first professional experience for Ricky.
In 2012 Ricky felt the need to try new musical realities: that's how he answered to the ad of Schysma and joined the band. His vocals is now recorded in "Imperfect Dichotomy" and history is still to be made... 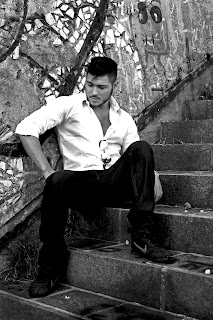 Vladimiro was born in 1988.
He's not the first musician of his family, since his father is a bassist and his uncle's a drummer. He started taking piano lessons when he was 8, but after two years he decided that it just wasn't the musical instrument for him.
His love story with the guitar started when he was 15: it was summer 2003 and his father taught him to play the very first chords, so Vladimiro took confidence with the six strings.
After one year as self-taught, he decided to take professional lessons so he could definitely improve his technique on the electric guitar. Throughout the years he had many teachers and he's still taking more advanced lessons (his Maestro is now Massimiliano Ferri).
When he was 18 he joined his very first band, with his father on bass and his uncle on drums: they played Carlos Santana's, Deodato's, Yes's and Beatles's covers. Some discussion between the members of the family took to the break up of the band. In the meanwhile, Vladi just jumped from a band to another, playing different musical genres (from hard rock to heavy progressive metal), but he never found a steady project to believe in.
In 2008 he started giving lessons to guitar beginners, and he still gives them. One year later, in 2009, he became the lead guitar of the band Baby-Lon, the hard rock band in which plays Michele, the younger brother of Martina Bellini. That's how he met Martina and Giorgio, founders of Schysma and that's why in 2011 they asked him to become the guitarist of Schysma. And now here he is, in the role of lead guitarist and composer. 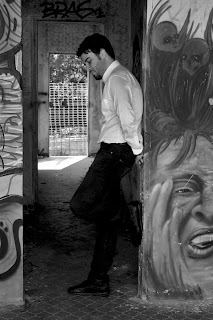 Luca was born in 1987, only child.
His family has a long history in music (his grandparents were singers and musicians, his great grandfather was the vice-conductor of Teatro alla Scala in Milan in the Toscanini's era, and his great grandmother was one of the most famous and world-wide known American sopranos and pianist during the 1900s and the 1910s), so it seems Fate couldn't make him nothing but a musicians.
He started playing keyboards when he was 11, but one year later he happened to play xylophone at a school party. From that moment on, life was just him and rythym. He practiced some coordination exercises alone, for about 3 years, using just two chinese sticks, or pens, to beat on his desk keeping ryhtym.
When he was 16, and almost completely four-limbs coordinated, finally his parents bought him an electric drumset and his first two sticks (he still keeps them). Then it was easy: after 6 months he could play some songs of high-technical bands like Dream Theater (his favourite and most inspiring band) or Pain of Salvation.
Feeling ready to debut with some real band, Luca joined Course of Nature, his first prog band, when he was 17, called by his best friend Teo. It was 2004. When the band broke up in 2006 because of the loss of some members, Luca started an infernal search for his new steady band, a 2-years long search which allowed him to play with more than 50 bands in Milan and other Italian cities until he finally joined Onderock, a hard rock band that became pretty famous in the Milanese area, making great live gigs.
During his Onderock period (that lasted 2 years 2007-09) Luca started to learn playing bass guitar by himself, as he did with the drums. It turned to be useful: when he went to live in Bologna because of his personal studies (in the common life, Luca works in the movie industrie as film-maker and in the publishing industry as novel writer), he became the bassist of the rock band Yanus. In the two years of his living in Bologna, Yanus self-produced a full album called "Lovanthology" in which Luca played both bass and drums. Unfortunately, his personal career outside music obliged him to turn back to Milan and abandon Yanus.
But again! This was a total luck for Luca, because in summer 2011 he could join Schysma answering to the announce through which the band was trying to find the drummer. Luca can now consider Schysma his ultimate band. He's now the drummer and one of the composers.
The real good piece of success, with "Imperfect Dichotomy", and much more, has still to come... 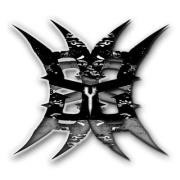